At present, China's per capita entertainment consumption still lags far behind developed countries. However, with the development of my country's economy and the improvement of people's income level, people will spend more time on leisure activities, and the proportion of cultural and entertainment consumption expenditure will be greatly increased. The development of large children's play equipment has become a trend change, and it is a good choice for parents to take their children out to play.

As the weather is getting hotter, indoor playgrounds for children are becoming more and more popular. It is the expectation of many young parents to play naughty castles in summer, allowing children to be in a thrilling and reassuring play environment. 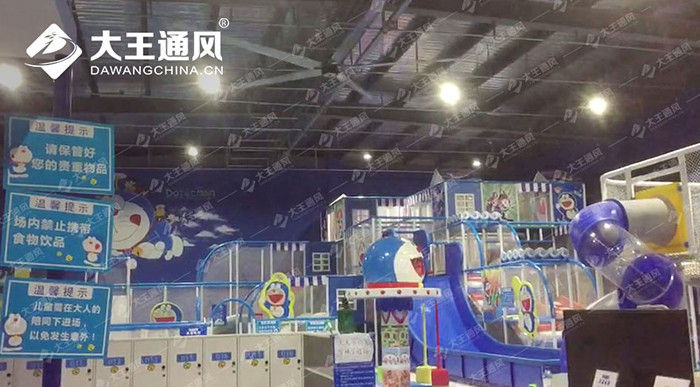 An indoor Doraemon theme playground has a variety of games and game equipment. The playground is novel and smart in shape and bright in color. It is loved by many children. Now, more and more children come here to play. Although the playground is located inside a large shopping mall and has a large central air conditioner, the amount of fresh air is insufficient, which makes the resistance of children with weak body resistance even lower, and various respiratory and digestive tract diseases take advantage of it, seriously affecting children. healthy.

At present, the utilization rate of large industrial fans in workshops is relatively high. In fact, as long as the height is higher than 4.5 meters, it can be used, such as railway station waiting rooms, basketball halls and other buildings. A large amount of airflow, when used in conjunction with air conditioners, can greatly reduce overall operating costs and achieve energy-saving effects while increasing indoor oxygen content and enhancing human body comfort.

The installation personnel of Dawang Ventilation will install large industrial fans for the indoor playground after the children are all home, and try to complete the installation work when it does not affect the normal operation of the playground. After the trial operation of the large-scale industrial fan, it has been loved by children and their parents, and the playground has attracted more children to play here.