A bus station has 48 computer ticket windows and 168 departure spaces. The departure direction radiates to 96 regions in the province, cities, counties and neighboring provinces. There are 3,012 daily departures, and medium and high-end buses account for more than 75% of the operating vehicles. The daily sending volume is 42,000 times, and the daily sending volume is as high as 92,000 times during peak hours.

At present, the bus station has central air conditioning, but there are problems such as insufficient fresh air, dull air, and high air-conditioning electricity costs. How to improve the waiting environment of the bus station and reduce maintenance costs in the later period has become a topic worth exploring. 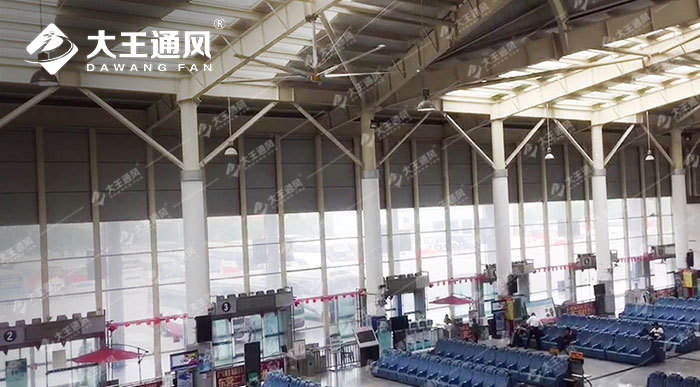 After investigating various ventilation and cooling schemes, based on the advantages of Dawang Ventilation Industrial's large ceiling fan for ventilation, cooling, high oxygen-enhancing capacity and energy saving, the bus station decided to use it to change the air environment for waiting.

The waiting room of the bus station is a steel structure with a high space height. After installing the large ceiling fan of Dawang ventilation industry under the roof of the hall, the huge fan blade drives the large area of ​​air-conditioning in the room, which evens the air temperature in the upper and lower spaces of the waiting room. Passengers and staff feel more comfortable. At the same time, after the industrial ceiling fan is used together with the air conditioner, the temperature of the air conditioner is reduced by 1-2°C compared with the previous one, and the daily electricity cost of the combination of the two is only half of the original air conditioner alone, which saves considerable operating costs.