How much is a large industrial ceiling fan in the waiting room?

Because the high density of people in the waiting room can release a lot of dust, odor and carbon dioxide, and produce a variety of microbial bacteria, coupled with poor ventilation, bacteria and other biological pollutants will survive for a long time in a specific environment Time and spread, if the total number of PM10 and bacteria is excessive, it is easy to cause the spread of respiratory diseases. While there are uniform cleaning and sanitizing procedures in waiting rooms, including cleaning floors, seats and armrests. However, such disinfection is not enough.

In order to make up for the lack of fresh air from the air conditioning system, some waiting rooms are now using large industrial ceiling fans to solve this problem. After using a large industrial ceiling fan, the huge fan blade pushes a huge amount of air, making the air in the waiting room move, and the number of air changes per hour can reach 60-120 times, improving the dirty air in the waiting room, forming a fresh and suitable air. temperature of the waiting environment. At the same time, properly increasing the temperature of the air conditioner by 1-2°C can save considerable electricity bills without affecting the comfortable waiting environment. 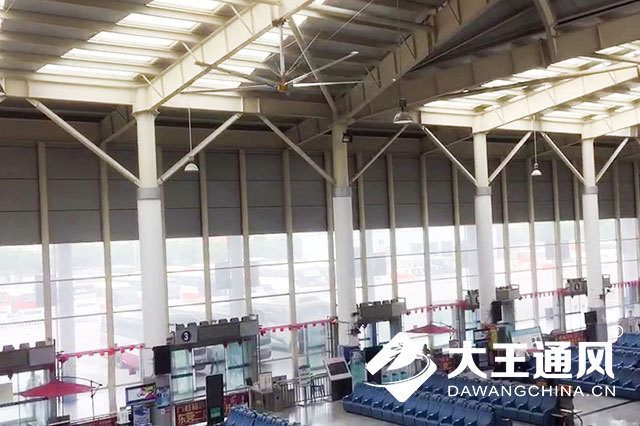 The large industrial ceiling fan installed in the waiting room has been loved by many passengers, so its price has also attracted the attention of the railway operation department. Generally, its price is affected by factors such as brand, overall material, installation service and so on.

The motors of Dawang ventilation series large-scale industrial ceiling fans are divided into geared motors and permanent magnet synchronous motors. Among them, permanent magnet synchronous motors are maintenance-free for life and do not require regular maintenance, which can save a lot of later maintenance costs. At the same time, the integrated wheel hub is made of 7075 aviation-grade aluminum material through CNC lathe processing and CNC precision machining technology, which not only ensures the high quality of the wheel hub, but also ensures the high precision of the wheel hub, and ensures that the accuracy of each part is controlled within the tolerance of 100μm , and also solves the problem of material strength in the mating part with the motor shaft.

After processing, each wheel hub will undergo an accurate dynamic balance test to ensure that the large fan rotor has a good balance performance, and also improve the safety of the fan.

The blades of the large-scale industrial ceiling fan are made of 5052 aviation-grade aluminum plate, which can withstand more than 3 tons of tensile force, and will not break when subjected to accidental impact. It is designed according to the principle of aerodynamics, with small wind resistance and can completely convert electrical energy into kinetic energy , the air volume is more uniform, and there is no void in the middle. 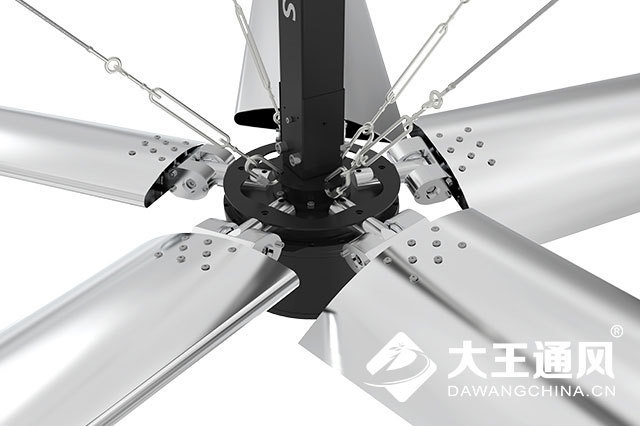 Safety is the top priority of production, and the alarm bell must be sounded at all times. In order to ensure the overall safety of the fan, Dawang ventilation series large-scale industrial ceiling fans use a full mortise and tenon structure, motor and chassis, chassis and leaf handle, blade and leaf handle In addition to the normal reinforcement connection, the tenon-and-mortise structure is also designed to double insurance. 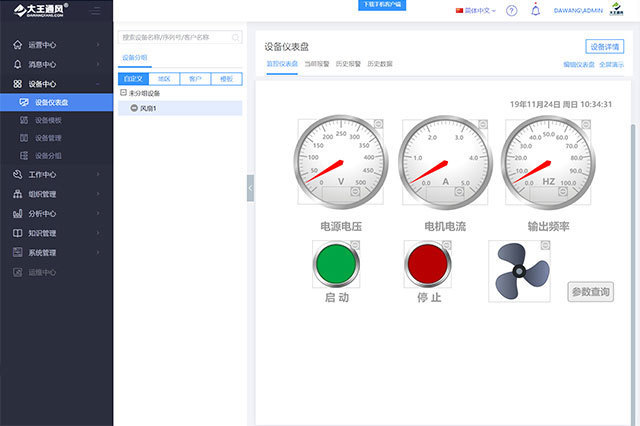 What kind of large industrial ceiling fan is selected directly determines its later use effect and safety performance. Good use effect, no accident in the later period, low maintenance cost, and long service life can be used comfortably, at ease, and worry-free.