What factors affect the cooling effect of industrial fans

Industrial fans play an important role in daily life and production Its main function is ventilation and cooling, especially in hot summer. The cooling method of industrial fans is that the natural breeze generated by the rotation of the fan blades blows on the surface of the human body, which promotes the evaporation of sweat and takes away heat, thereby cooling the human body and bringing a sense of coolness. When an industrial fan is running, its cooling effect will be affected by many factors, which will greatly reduce the effect. So, what are the factors that affect the cooling effect of industrial fans? We tell you about it. 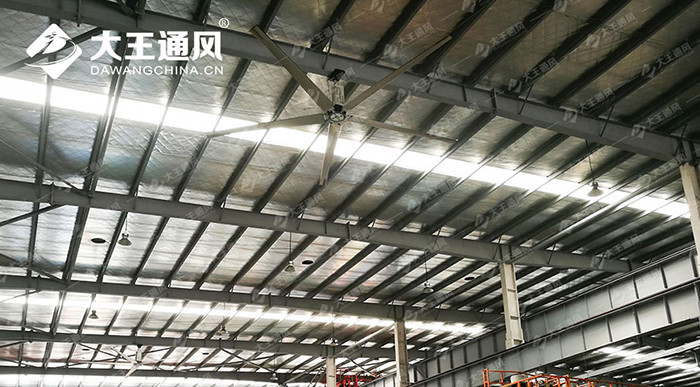 Electric motor performance: The use of an industrial fan depends on the power provided by its motor, and its operating efficiency depends on the performance of the motor. A motor is an electromagnetic device that realizes the conversion or transmission of electrical energy according to the law of electromagnetic induction. Its main function is to generate driving torque as a power source for electrical appliances or various machines. Industrial fans will run better if the motor power is high.
Fan blade design: The fan blade is the main component of the industrial fan, which is driven by the motor to generate wind power. Fan blades are components that directly generate wind power, and their function is affected by many factors, such as the number, angle, width, and curved surface of fan blades.
Space area: Although the diameter of the industrial ceiling fan blade is relatively large, it is also limited, and the area that can be covered during operation is also limited. Once this coverage is exceeded, the overall cooling effect of industrial ceiling fans will be greatly reduced because other places cannot play the role of ventilation and cooling.
Indoor temperature: The principle of industrial ceiling fan cooling is to accelerate space convection through the exchange of hot and cold air to achieve the purpose of cooling and heat dissipation. However, the convection exchange in this space requires a certain time process, so if the indoor temperature is too high, it will have a certain adverse effect on the cooling effect of the industrial large fan. The temperature and humidity reach a comfortable level.